Pretend you've gone back in time to when dinosaurs roamed the earth. OK, not that far back, but close. Back to even before word processors were invented, and back to the dawn of the manual typewriter. You see one sitting in an antique store and ask yourself, "How does a typewriter work?"

​How Does a Typewriter Work?

A typewriter works by pressing a series of keys. As you press each key, an arm containing that letter, number or special character impacts an inked ribbon. That ribbon places an inked impression of the character on a sheet of paper and then moves the paper over one space to prepare for the next impact.

While you may never need to use a typewriter, it's fun to contemplate how people used to manually type letters, school papers, and even entire manuscripts onto paper. So let's examine how this now-archaic device works, and what uses you may even find for one in today's automated world.

​The Magic of the Typewriter 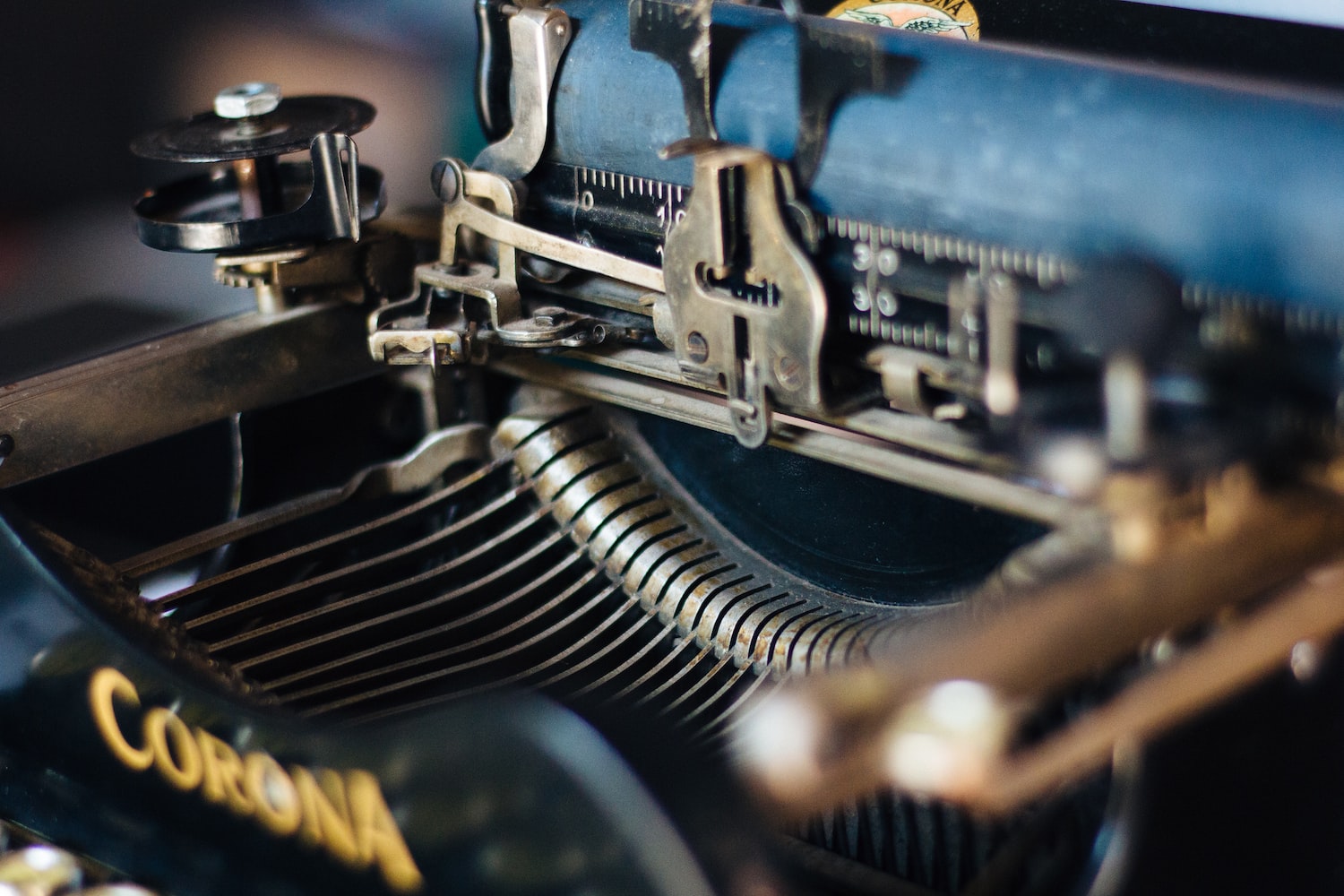 Where did this amazing device come from? Who invented it and when? What different models of typewriters exist? These are the areas we'll investigate as we learn how does a typewriter work.

Within a short time after that, the typewriter became the go-to machine for virtually all correspondence and business documents except where a handwritten note was considered the appropriate form of communication.

The typewriter was the standard writing device in business offices for one hundred years until word processing computers began to make their way into the workplace. Early word processors were cumbersome to use, requiring codes and keystrokes to align properly the words on the page. For many years, word processors lacked WYSIWYG (pronounced, 'whizzie-wig') capability, an acronym that means, 'what you see is what you get.'

WYSIWYG word processors displayed the page as it will look when printed. Nowadays we take such capability for granted, but it was not always that way. At least with typewriters, every page was WYSIWYG!

If you have never seen a manual typewriter before, and don't know how they operate, look up a picture online before reading further. That will make the next sections easier to understand.

​How Does a Typewriter Work: Mechanical Characteristics 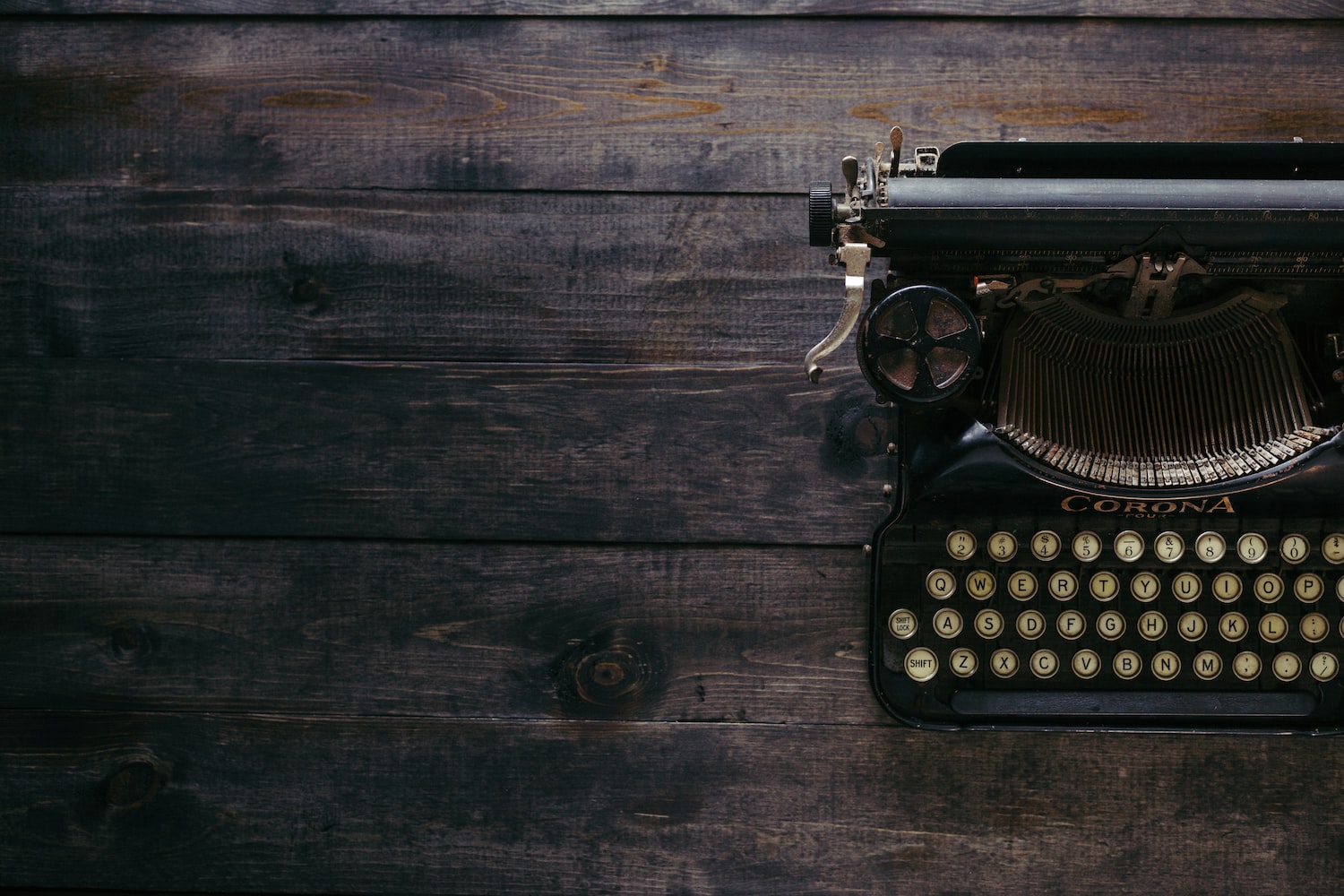 Early typewriters were completely manual. Your fingers powered the typewriter by hitting the keys.

How Do You Set Up Margins and Tabs?

Before typing, you can set margins and tabs by moving metal pins to different places along the length of the carriage. The carriage is the long, circular moveable device that holds the paper in place. Once you have set up the margins and tabs, you use the knob at the end of the carriage to roll a piece of paper into the carriage, stopping the paper's vertical movement when you get it to the point you want to start typing.

How Does a Typewriter Work (Manual)?

When your finger pushes down on a key, a lever swings another lever called a type hammer toward a device that holds the ribbon. The type hammer has usually two characters embossed on it. Those characters are most often a small letter and a capital letter, or a number with a special character such as a dollar sign, asterisk, exclamation point or other symbols on it. That layout continues on today on our computer keyboards.

As the type hammer nears the page, an inked spool of cloth called a ribbon lifts up and positions itself between the type and the paper. The type then strikes its lower half (for a small letter) or its upper half (for a capital letter) depending on whether you've hit and held the shift key.

What Happens When You Let Go?

When you let go of the key, a spring makes the type hammer fall back to its starting position. The carriage then moves one space to the left, so when you hit the next key it prints that key's image in the next space on the paper. The ribbon also moves one space to the left to give a new ink supply to the next type hammer. This progression continues until you get near the right margin of the page.

​The Mystery of the QWERTY Keyboard 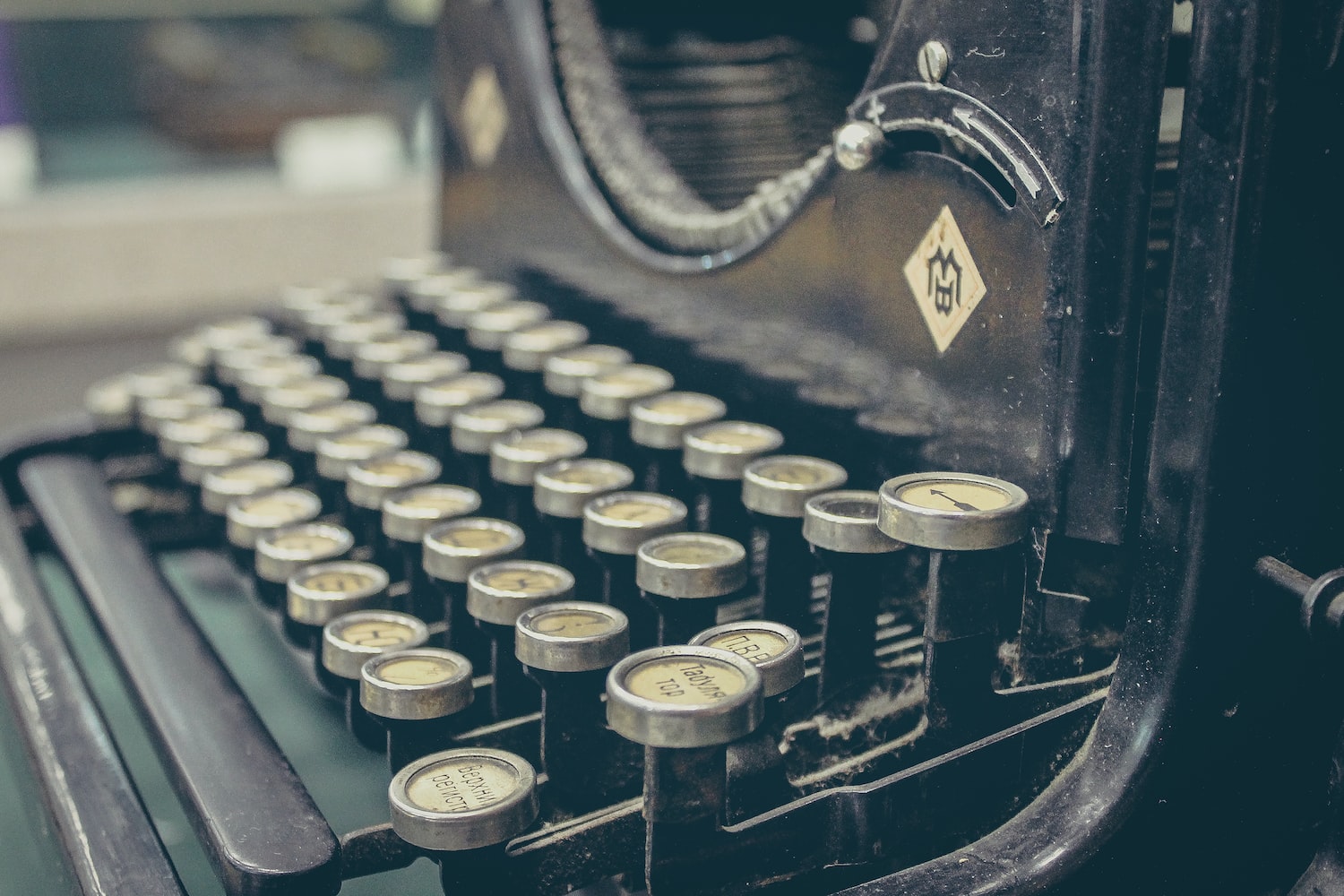 Back in 1868, one of the inventors of the typewriter, Christopher Sholes, realized a flaw in the typewriter's design. He had initially arranged the keyboard so that typing was almost evenly distributed between the typist's left and right hands. As typists became faster, one problem quickly came to light. If the typist was too fast, the next type hammer rising up to leave its imprint on the paper would hit the previous hammer coming down, which would jam the typewriter until they could pull the keys apart.

To keep this from happening, Sholes rearranged the keyboard so that roughly 60% of the work was done by the left hand. This slowed down typing enough such that jammed keys became much more rare. On the downside, typing speeds became slower. 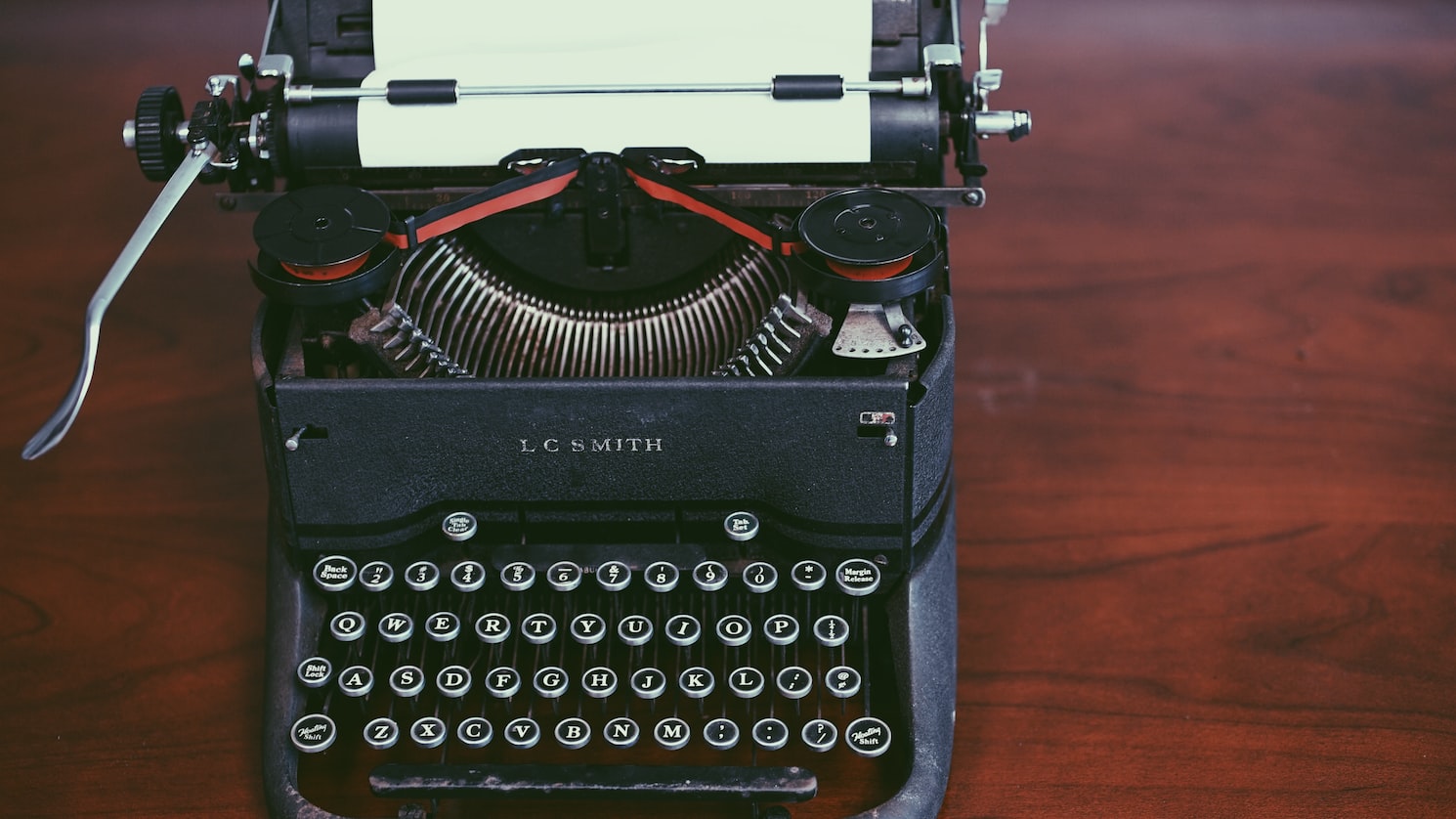 Recognizing that the QWERTY keyboard had been developed purposely to slow down typists, August Dvorak, along with his brother-in-law William Dealey, rearranged the keys on the typewriter keyboard to once again evenly distribute the typist's work between their left and right hands. This keyboard layout, developed in 1936, came to be known as the Dvorak Simplified Keyboard.

Dvorak did extensive studies to develop his keyboard layout. He found that around 50% of keyboard hits occur on the top row, while only around 30% on the home row. Rearranging the keyboard to balance out these differences makes the keyboard much more efficient. What do you do when you hit the wrong key? With a word processor you just back up and type over, but you can't do that with a typewriter. The ribbon's ink is not easily erased. So typewriter manufacturers and others developed ways to allow you to correct your mistakes.

The BIC company developed a product called White-Out. If you've never seen White-Out, think of a little plastic bottle of white paint dissolved in a quick-drying medium. With White-Out, you painted over the incorrect letter, blew on it until it dried, and then typed over it with the correct letter. Not an elegant solution, but at least it worked.

A slightly less messy solution was Correctape. Correctape is a white paper line with adhesive on one side that you can place over an incorrect word and then retype the correct word on the Correctape. Instead of having white blobs all over the paper, you have small white lines. Although they rarely match the color of the paper, they're better looking than the alternative.

IBM made a series of correcting typewriters. They developed an ink and removal tape combination that would allow the typist to hit a correction key and have the type hammer hit a white tape that would lift the erroneous letter off the paper. The typist could then type over that space with the correct letter. Of course, the imprint of the first key remained, but with no ink in that embossment, the document looked fairly clear of visible overstrikes.

​A precursor to the word processor was the buffered typewriter. These typewriters didn't type directly upon each keystroke, but kept a line or two of the document in a buffer before committing it to paper. This allowed the typist to review portions of the document and correct errors. Once the typist approved the section, he or she pushed a button and that section would be automatically typed on the page.

So, how does a typewriter work? If you've read this article, you now know. While manual typewriters (or even electric ones) may seem like ancient history, if you ask your grandparents (or maybe even your parents), they have almost certainly used one or both.

So don't be too disparaging of that old clunky device. It was one machine that changed the world. 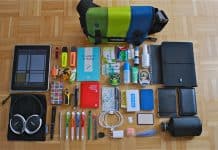 What Does EDC Stand For? What it Means and Why We Love It