Everyone has fond memories of snapping a shot with an instant camera, watching the photo eject from the base, and then waiting impatiently for the image to emerge from the opaque surface. Polaroid is the most famous instant camera manufacturer, and though the brand manufactures a variety of products, they are most famous for their instant cameras. Instant cameras seem magical, but it has often been said that technology seems like magic if you don't know the process involved. In this article we will attempt to answer the question, "How does a Polaroid camera work?"

How Does a Polaroid Camera Work?

When we think of photography, we think of a final image. A great photo is one that moves us on a fundamental level through the subject, the lighting, the shadows, and other artistic elements. Although most people think a photographer's work ends when he or she pushes the shutter button, the truth is snapping the picture is only a small part of the photographer's job. Developing film and, today, enhancing images with digital technology, is as or more important than taking the picture itself.

If you are wondering how does a Polaroid camera work, it's important to start at the fundamentals of how film works. With the advent of digital cameras, the hobby of developing film has somewhat fallen out of style. However, several decades ago it was common for amateur photographers to set up dark rooms and develop their own images. A darkroom is like an early version of Photoshop, but instead of using artistic digital tools, you can adjust and enhance a photo by experimenting with exposing film and images to differing concentrations of chemicals for varying lengths of time.

How Does Film Work? 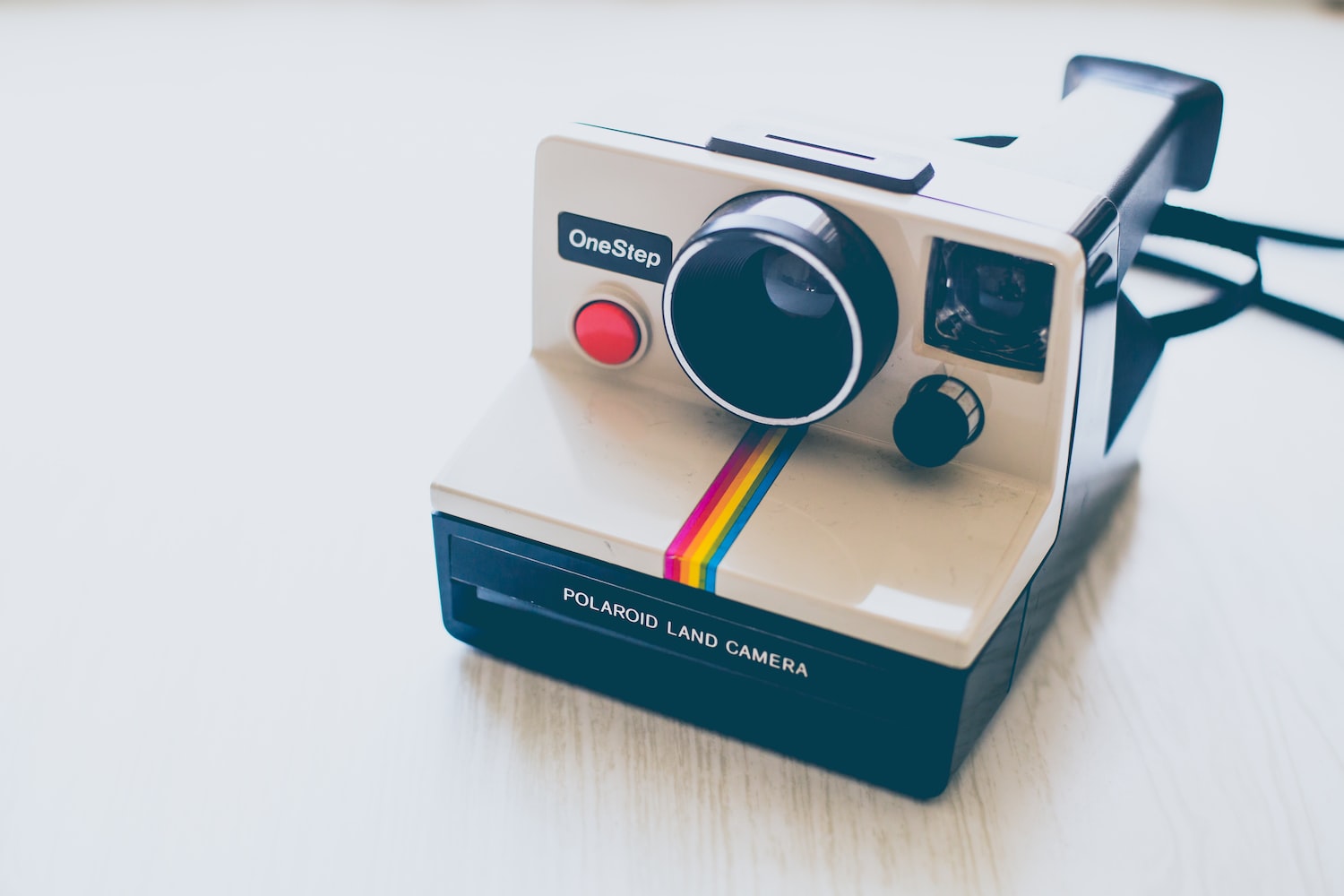 Photography is the process of capturing light on a film negative. Photography has been with us for a long time. The first photo was taken by French inventor Nicéphore Niépce around 1826, and the first color photograph came in 1861 by James Clerk Maxwell. The process has evolved over time with early photo negatives evolving from a glass to a plastic base.

Normal film consists of a silver compound on a plastic base. When the compound is exposed to light photons, it forms silver atoms. The difference between black and white and color film is that black and white film has a single layer, while color has multiple layers which are each sensitive to blue, green, and red light. Once a negative has been exposed, the developer must use chemicals to transform silver atoms into metallic silver. Dye developers and dye couplers are used to complete the process. Photo effects like contrast can be enhanced through the development process.

Once you have a negative, you can use an enlarger to project the image onto a sheet of photographic paper. The paper is then treated with developers, fixers, and water baths until the desired image is achieved. The amount of time the image is projected onto the paper, and the amount of time the paper spends in the various baths both contribute to the contrast and vibrance of the final image.

How Does Instant Film Work? 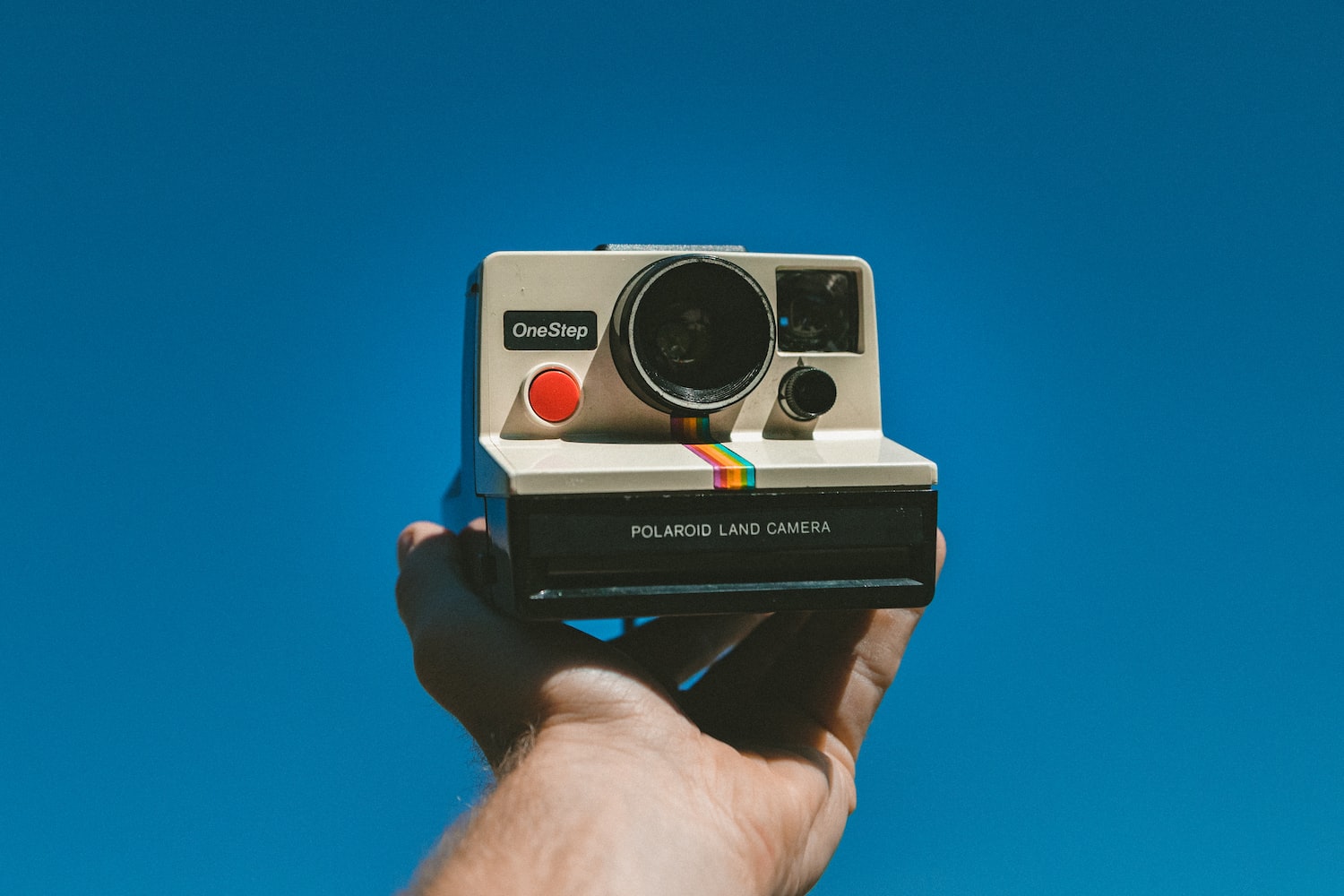 Capturing and developing an image is a complex process with a lot of critical steps. Instant film combines every step of creating a photographic image into a single film cartridge. In 1947, Edwin Land created the first instant film which could develop into a picture in around 60 seconds. His company, Polaroid, became very successful and continues to introduce improvements and refinements to instant cameras to this day.

Instant film has both negative and print elements contained in the same paper. Polaroid film has three layers which are each sensitive to a different color of light. Beneath each color layer, there is a developer layer with the dye couplers. Beneath the color layers there is a timing layer and an acid layer. The chemical reactions necessary to create an image happen in order after the application of a reagent.

How the Polaroid Functions

How does a Polaroid camera work? First you insert the film into the camera. The camera acts as an enlarger and when you press the shutter button, the film is exposed to light photons that recreate the image. Prior to taking the picture, the reagent is collected in a line along the bottom of the film. As the photo is ejected, it passes through a set of rollers that spread the reagent over the film and begin the chemical reaction that results in an image. The reagent soaks down and transforms the exposed film into metallic silver and dissolve the developer dye which allows the image to emerge.

The image develops first and then the opacifiers on top of the film dissolve which creates the effect of an emerging image. The opacifiers are on the film to prevent further exposure to light during the process of development. So the answer to how does a Polaroid camera work is that the film combines a very large sequence of film development steps into a process that can be activated by the application of a reagent smeared over the film by a set of rollers.

What Are the Disadvantages of Instant Film? 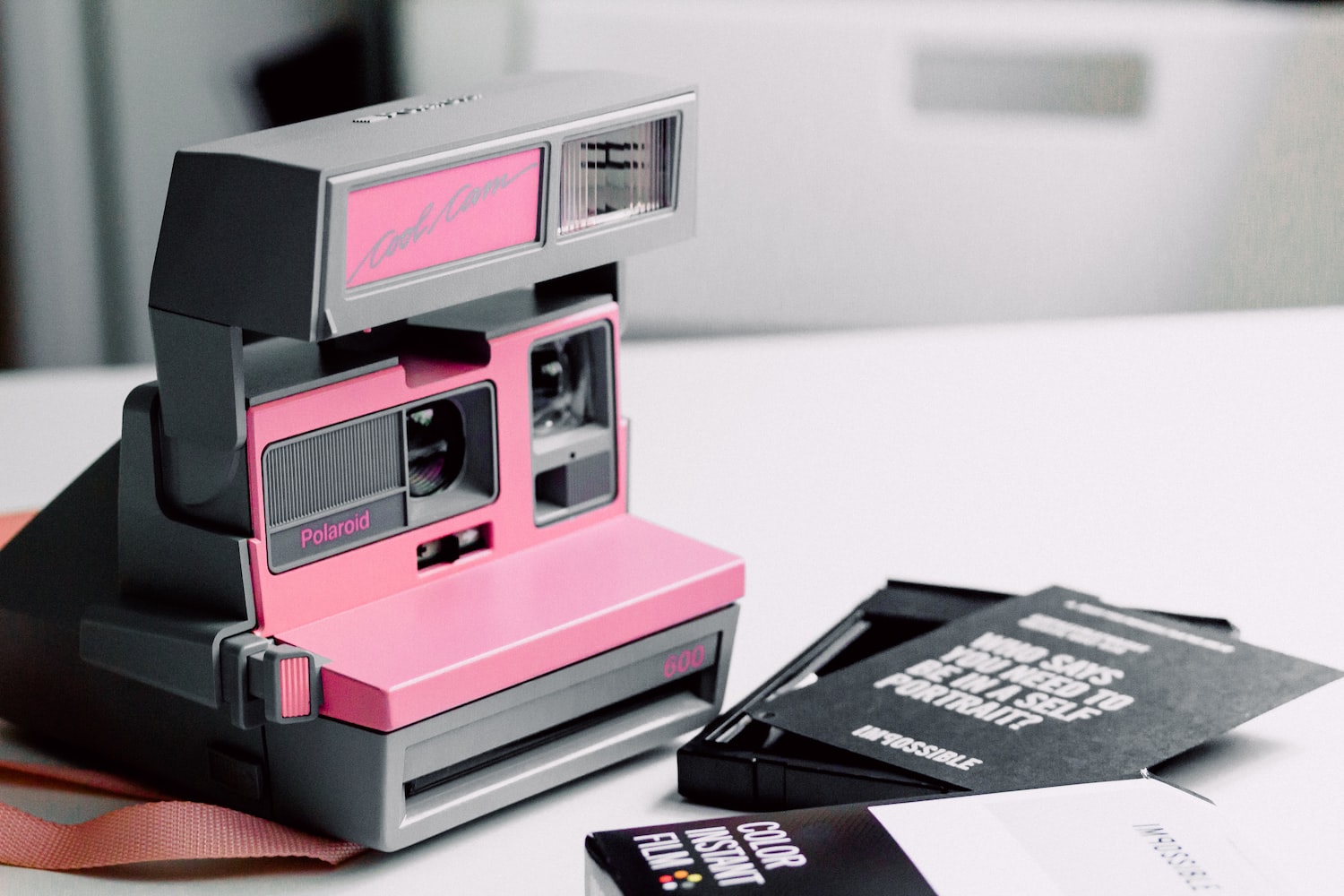 Instant film is a fantastic invention that allows you to take a picture and hold the resulting print all in under a minute. As great as this seems, there are some disadvantages to using instant film.

Instant film encapsulates every step of photography from inspiration to print creation. However, many of the intervening steps allow photographers to manipulate their images in a way that creates more pleasing final results. With instant film, you do not get a photo negative that you can use to create multiple prints with variations in size and contrast.

Instant film is not the best choice for artistic photos, but it is the best option when you need a print instantly. Also, there is something special about an instant print because you know that it is one of a kind. In an era where every communication is sent digitally with the chance that it could be replicated thousands of times on the internet, there is a warm, personal touch to receiving a unique instant print.

Using instant film eliminates an additional cost of paying somebody to develop the image. However, instant film is generally more expensive than traditional film, and is much less cost effective than a digital memory card which can be erased and used again and again. Instant prints can cost as much as two dollars per photo. Polaroid and other companies have largely shifted to credit card sized mini-prints which are more cost effective.

How Do Modern Polaroid Cameras Work? 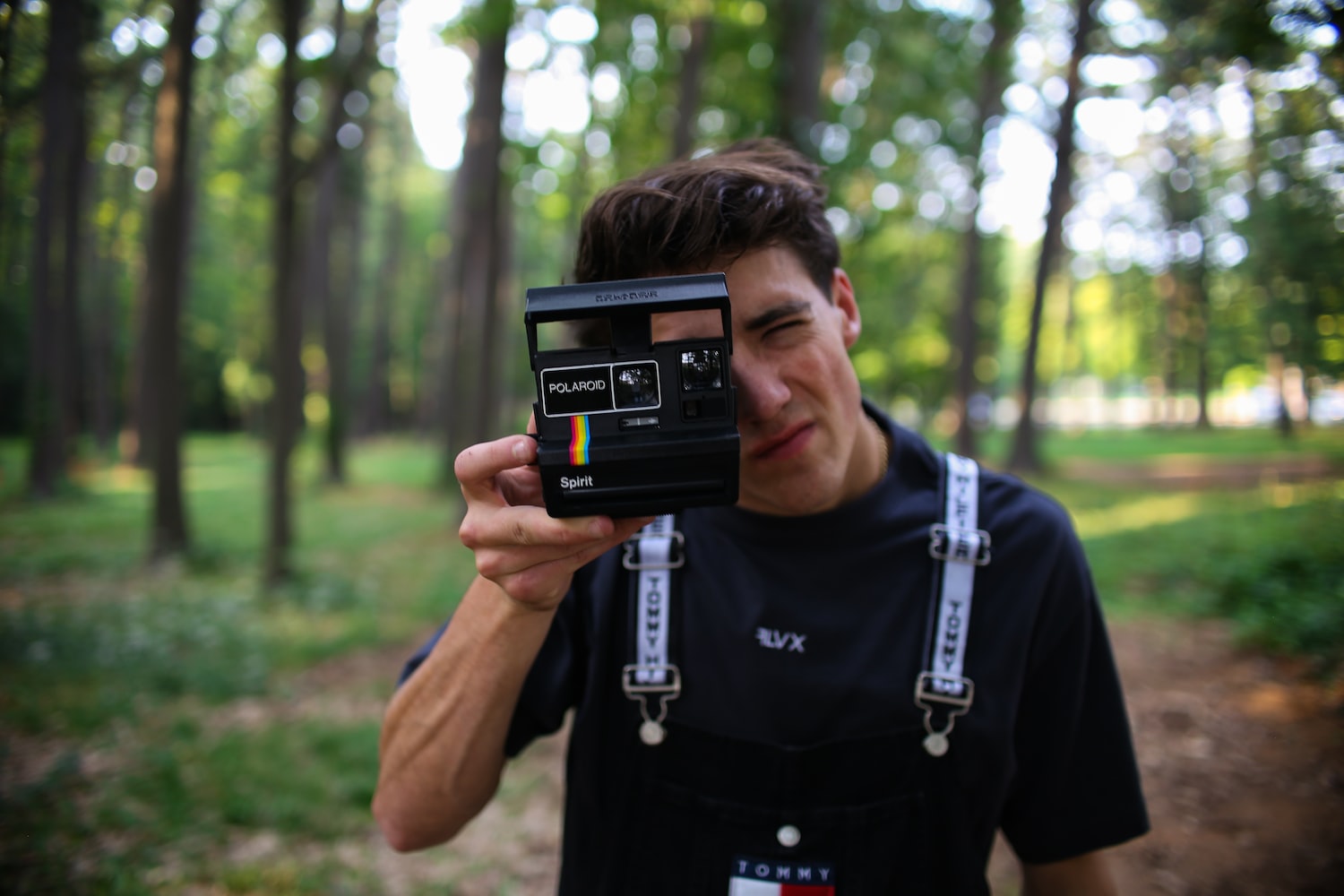 Technology in photography is under a constant state of evolution, and the technology of instant print cameras is no different. To answer how does a Polaroid camera work, it's important to examine modern cameras that use a more efficient process than their predecessors. Some modern cameras still use the chemical process to create an instant print.

However, modern cartridges cannot be used in old cameras. The reason for this is that old cartridges had a small battery in the film cartridge to power the cartridge. This is why it's not advisable to purchase old Polaroid film cartridges for your old camera as it's likely the battery has died and the film won't work.

Rather than creating an image with chemicals, print paper uses heat to activate the crystals. Therefore, you expose the paper by clicking the shutter button and the paper is then subjected to a heating element to draw out the image. With print paper instant cameras, the full, vibrant image emerges directly from the camera with no delay for the opacifiers to dissolve. Print paper is less expensive than the traditional, chemical method.

The Evolution of Instant Film

Asking how does a Polaroid camera work is not as simple a question as it might seem. An instant camera represents the end result of nearly two hundred years of photographic technology. Also, modern instant cameras have shifted from a chemical process to a heat and crystal process that is more efficient, less expensive, and creates a similar result.

Cameras that utilize print paper can be used as portable printers, and many are capable of importing images from mobile devices via Bluetooth. However, you don't get to watch the image emerge through the dissolving opacifier layer, which is a major part of the magic of instant film. In order to get the best idea of how does a Polaroid camera work, your best option is to start with the basics and spend a little time experimenting with developing photographs in a dark room.

It's only after you've taken the time to experience every complex step of creating an image from the time you click the shutter to the time you hold the print that you can really appreciate how clever a device the original instant camera is. With digital/instant camera hybrids that allow you to apply filters and add personal messages to instant prints, it's clear that instant cameras will continue to be a popular option for photographers for a long time. Break Down Waste With the Best Kitchen Compost Bin